Hi! This is my first day of using Morroblivion and I wanted to stop by and say thanks, post a bit of info for other Linux users, and ask a (probably silly) question...

Ok, so firstly a very big well done and thanks - this mod is a fantastic idea and despite the tricky install I'm a bit stunned that it even works (let alone works as well as it does).

Second bit is gonne be boring to most people, just really posting it in case there are any other Linux users out there who might find it useful (please feel free to skip this bit, I'll put the writing in blue so you know when to stop ignoring the rambling!). Here we go:

Did this in three parts:

With the exception of patch 2, all of these had to be extracted, then re-compressed so that the "top level" of the compressed file format was "Data".

They were then all extracted to one "Data" folder under C:\Morroblivion using PeaZip to avoid case sensitivity issues.

Complete "Data" archive then extracted to the folder:
c:\Program Files\Steam\steamapps\common\oblivion


5. .NET 4 does not work under WINE, so I made a little workaround:

2. Copy MorroblivionInstaller.exe to this folder

4. In terminal, cd to the new folder, e.g.
cd /home/rob/.wine/drive_c/Morroblivion

You can now complete the installer.

Ok like I said, boring bit done, I've only played a few minutes but it all looks good to me ;)
Only encountered a few very minor teething troubles:

1. A quest appears randomly when you first go through the process of moving between the boat and Scyda Neen proper:
The Barbarian and the Book
This appears to be a bug and is mentioned in a bug report already, so will wait for a fix ;)
See also: http://morroblivion.com/the-barbarian-and-the-book

2. Various candles and lanterns were hovering at a 90 degree angle
Resolved this by re-applying the Additional Support Files 2.rar as per this post:
http://morroblivion.com/forums/morroblivion/mods/1722

3. Appears as though one single texture (only one I have found so far) is missing.
The "pouches" on the back of the guard are shown in purple, implying a missing texture.
If I've somehow missed a file somewhere I could simply drop it in the correct folder - unfortunately I don't know which file is missing...

So my question is:

Does anyone know which texture file is used here so I can check whether I've been daft and "mislaid" it? 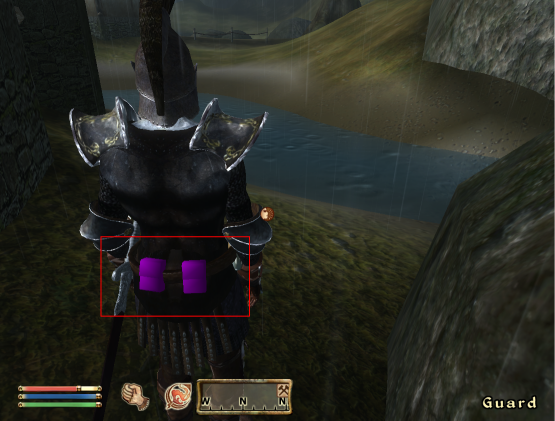 Member
Offline
Last seen: 4 years 4 months ago
Joined: 03/08/2011 - 04:00
Karma: 985
Linux, dude!
Awesome work getting Oblivion and all the mods running in Linux! I use to also run Oblivion along with a ton of mods in Linux. Now I that I'm on the Mac, I run a "ported'' Oblivion, using a Cider wrapper. It's very similar to running Oblivion through Wine, except you don't run into potential problems when you upgrade or downgrade Wine. A couple questions though for us thinking about installing and running Oblivion in Linux/Mac: This was all done through WINE right? If so, what Wine version? And what distro and version are you using? Yeah, I also had a few missing textures when Oblivion was running under Wine. Which is funny, because I extracted the textures using 7zip under Wine. I hope you get that texture problem fixed.
+1 -1
Karma: 0
+1 -1
Karma: 0
Top
Sun, 06/26/2011 - 23:43
#3
HeWhoWatches

In case it's of any use, I've detailed the process of getting the glc screen recorder working here. On that page towards the bottom there's also a (not very good) test video of Morrobilivon running under Linux that I created as part of my investigations - nothing special, but it proves it can be done! ;)

Edit: Have added the webm video as embedded HTML 5 for those with shiny new browsers...

Well, after much investigation I found (and fixed) the texture problem! First I loaded up the Construction Set and confirmed which nif file was being used, then I used Nifskope to load the nif in question...

If anyone else has had this problem, you can get the fixed nif file here.

Thanks! I was surprised that the Construction Set and windows version of nifskope worked under WINE... now I'm almost tempted to do a bit of modding... wonder if the NIF importer for Blender is any good?

As a side note, I recently reinstalled everything the 'proper' way using Wyre Bash. I've put together a guide for Linux users (well, Fedora 'cause that's what I use, but pretty sure it'll work much the same for Ubuntu etc.).

If anyone needs it, it's here.

I've been sure to point out that it isn't a replacement for the proper instructions and it's only to give other Linux users a helping hand with some stuff that takes a while to figure out.