"Dummy spells" which show up in your Spells tab is not a feature of UCWUS.  If you want that feature, then you must install the latest version of Morroblivion-Fixes.  Without Morroblivion-Fixes enabled, UCWUS works by changing the active spell icon when you first equip an enchanted item that uses the Cast-When-Used system.

Thanks for linking the Fixes thread! I will download all of them to make my game even better now! Thanks!

EDIT: first i was thinking this is a bug but then i realized there are ESP`s for this idk why tho xD its funny i misslooked it.

You probably already fixed this: morroblivion-magic-fixes must be moved BELOW Lost Magic OBME on the load order.

This is great!  I can confirm that Rings enchanted with Projectile Spells like "Ring of Lightningbolt" and "Ring of Fireball" can now be safely equipped while standing next to friendly NPCs -- in other words, projectiles are no longer fired on-equip.  Thanks, qwertyasdfgh!

One behavior still present: equipping items with hostile touch enchantments (Ring of Ironhand) while standing next to NPCs will still result in crime and assault charge.  I don't know if the stopProjectile system can be applied to these effects as well... I'll look into it.

Regardless of the hostile touch bug which has been present since v064,  I think we should still merge this updated UCWUS file into v065-RC3.  It provides a significant fix for the CWU items with hostile target spells without creating any new issues/bugs.

I think I managed to deal with touch spells problem. Will test a little more, then post an updated file.

UCWUS should be merged into RC3, Less Plugins for the user and possibly easier to work with for future updates if I'm not mistaken?

Excellent!  I will try to do as much testing of this update as I can within the next 48 hours.  If no one finds any major issues, then I think we can include this with v065-RC3.  My current plan is to try to release v065-RC3 on June-10 or June-11.  FYI, June-12 is the release date for Nehrim on Steam.

UCWUS should be merged into RC3, Less Plugins for the user and possibly easier to work with for future updates if I'm not mistaken?

Normally, I would agree -- but not now since we are at a Release Candidate stage.  Merging a complex ESP that contains new locally defined FormIDs to new magic records, quest records and script records for quest scripts, object scripts and dynamic OBSE function/handler scripts has a huge potential for getting screwed up in multiple places...  the separate UCWUS v1.4 ESP should be included with RC3 but, in my opinion, the ESP should NOT be merged into the ESM until v066.

I have uploaded a quick 1.4.1 update, which fixes some bugs I missed and also restores a couple of items that were missing from the master (not all of them though, there are still some missing).

I have uploaded a quick 1.4.1 update, which fixes some bugs I missed and also restores a couple of items that were missing from the master (not all of them though, there are still some missing).

Great work.  I would not worry too much about the missing items for now -- we can take our time to find and add all the missing enchantments after v065 is released; as a standalone UCWUS / enchantments update that can later be merged into v066.

Unfortunately, it looks like the game engine is ignoring the command to set the magic effect to non-hostile.  To reproduce findings:

Everything else still seems to be working correctly, so I will proceed with packaging UCWUS 1.4.1 with Morroblivion v065-RC3. 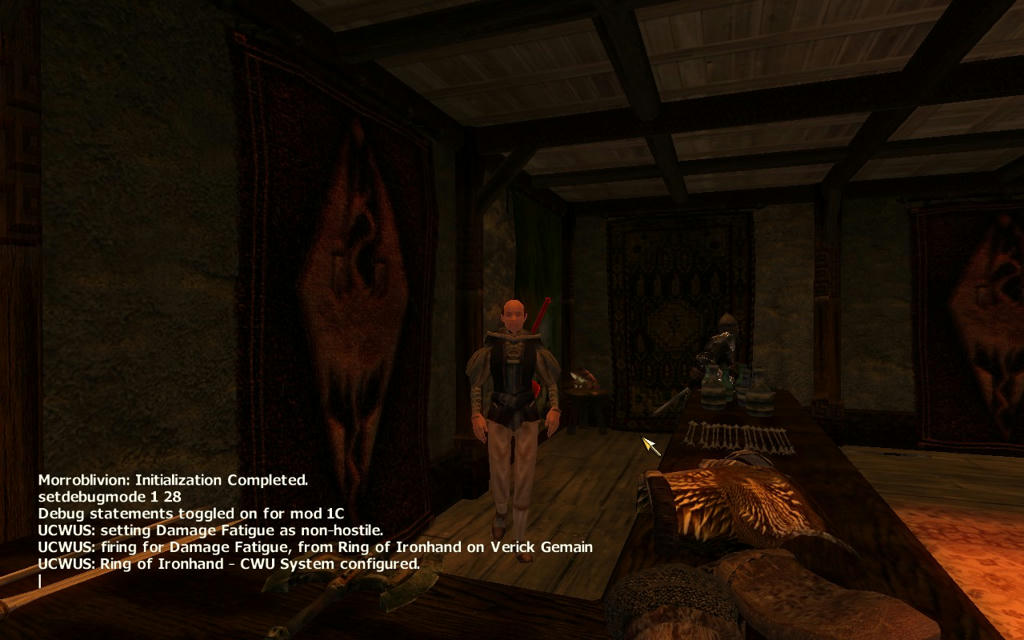 Why do you think so? If only based on console debug print, it's a quirk of PrintD and SetDebugMode console commands - effects are set back to hostile in mwCWUItemScript, which is technically part of Morrowind_ob.esm and not UCWUS esp.

Sorry, I should have been more clear:  The screenshot was taken about 500 ms before guard reaches me (seen running in the background) to tell me that I have broken the law, and about 1 second before Verick (seen backing up) draws his hammer to attack.  There is no magic effect animation played on the NPC.  Querying the NPC stats, I do not see any drop in Fatigue which can be attributed to the ring.  So, my current interpretation is that your scripts are successfully dispelling any negative effects before they occur but the game engine is still registering a hostile PC action.

I also spent several hours inserting additional debugging statements to several of the CWU scripts to verify that they are running when and only when expected and are successfully completing without crashes.  Due to limited time, I was not able to trace through all CWU functions and scripts, but I was able to see enough to be suggest all other CWU use-cases seem to be working, and that the hostile touch magiceffect handlers are being activated against nearby NPCs but the actual negative effects themselves are being successfully dispelled from the NPCs.  However, the negative NPC/guard reactions associated with hostile PC actions are still occurring.

So, since there are still several working bugfixes with v1.4.1 and the one issue with touch effects has been present since at least v064, I will proceed with replacing the UCWUS included with v065 release candidate with UCWUS v1.4.1.

I can't reproduce this, just did exactly what you described and nobody attacked me.

EDIT: Well, I was able to reproduce it now, and it's related to OBME - looks like that without OBME the game doesn't dynamically calculate hostility state for enchantments at all. I even tried setting Damage Fatigue to be permanently non-hostile and enchantment is still considered hostile, even when I can cast Damage Fatigue spells with impunity. Not sure what can be done about that, I'll leave the code in, at least it works for OBME users.

That's very good news then.  Perhaps it is just a peculiarity with my setup.  It would also be less work for me in the "Known Issues" section, hehe.  For now, I will assume that only my system is affected since no one else is reporting it.

EDIT: Thanks for your update about OBME.  I will list it as a known issue for players who do not use OBME.

Actually, I think I found a different solution and it's the enchantment swapping method you suggested earlier. In my tests it solved the touch issue and also the target projectile issue at the same time, and in a more simple way too. If no unexpected new issues arise, will update the mod soon with this + some other smaller fixes.

That is great news.  Take your time with the new update -- I am already about to post v065-RC3.  We can include the new UCWUS update with v065-RC4 (perhaps next week).

I just wanted to confim that UCWUS 1.5 is working great.  No more issues with hostile touch or ranged enchantments!  Thanks!   FYI, there is a lot of print console spam during mouse-over of an enchanted item.

I have posted Morroblivion v065-RC4.  It includes the UCWUS.esp from v1.5.1.  I also manually merged all records from CWUItems.esp into the main ESM, one record at a time.  All scripts affected by FormID renumbering were recompiled.  Leveled lists were relinked to new FormIDs.  FYI, here are the FormIDs changed during the merger:

Unfortunately NorthernUI's dll breaks both the pop up functionality and the charge limit functionality. Equipping a magic item like the Engraved Ring of Healing shows the item in the magic slot and doesn't drain magicka when cast, however the inventory pop up shows constant effect and the item can be used without limit. Would be great if this could be fixed for both vanilla Northern UI and the overhaul replacement. I also tried using both Display Stats and Extended UI, neither fix the issue.

And if you also try to use a controller, that'll break a whole bunch of other stuff too.

Unfortunately NorthernUI's dll breaks both the pop up functionality and the charge limit functionality. Equipping a magic item like the Engraved Ring of Healing shows the item in the magic slot and doesn't drain magicka when cast, however the inventory pop up shows constant effect and the item can be used without limit. Would be great if this could be fixed for both vanilla Northern UI and the overhaul replacement. I also tried using both Display Stats and Extended UI, neither fix the issue.

A partial workaround at least for the controller issue mentioned by qwertyasdfgh, is to use a "joy-to-key" utility to emulate keypresses when a controller button is pressed.  This should make some things more compatible between NorthernUI and Morroblivion, like the JDLevitate scripts.  Maybe you can try this with UCWUS functions --> example: use a JoyToKey app to map casting to a keypress rather than using NorthernUI's default controller mapping.  For the menus, try mapping joypad movements to keyboard navigation movements.

Eek - didn't realise using a controller would break a load of stuff. There I was, on my sofa, Morroblivion on the TV, living the dream.

Well - will keep an eye out for issues then. Thanks for the heads up. NorthernUI is so convenient and has rocketed into the de facto standard for Oblivion controller users, a shame it throws such a spanner into the works of other mods.