Ok, So this is where I will be posing updates of the modeling side of the Dwemer makeover.

Here is a quick mockup of a pillar, Nothing flash as its just an idea piece to judge how the textures work together. Note that the brick is not actually one of the textures we will be using (The final one will be much tighter) Now I need people to help come up with a list of interior objects to place around the world. These can be anything that feels like it should be made by the Dwemer People for everyday living.

I am dreaming about some movable lighters, i think gas-powered (electricity-for-everyday-use would ruin steampunk efficiently, i presume).
---
Also dwemer keeps looks like in need of bathrooms and all it's equipment. I hope dwemers was more advanced in this way.

For player use there can be some power sources ("wells" for soul gem recharging or giving you mana) and vending machines with canned food.

> giant robotic arm
= i think this is too much. But lift for worker/librarian (as in observatory - you can make great cylindrical library) would be more nice asset.

In Morrowind, the Dwemer seemed to prefer brown concrete or cement walls that they tend to engrave writing on. It would be interesting to see machinery used in the production of concrete (and maybe some frames used to fill wall panels with concrete to dry).

yeah some sort of concrete or cement might fit better for this, I can draw up a design monday night after my physics exam! maybe even with like dwemer runes cut into the surface, I'll be making a pattern for those based off of the wall markings in morrowind

Nice, it would be interesting to see containers around with concrete ingredients too, ancient roman concrete used volcanic ash so there could be ash salts around the machinery in barrels.

Also, clockwork machinery/gears that are set up like so: I'm not really sure what that is for, but it looks interesting.

Methinks it's like a oil press or grain mill.

The cast concrete is starting to look like a really good idea, it also fits with the dwemer ruins that were in morrowind. Ill toy with some ideas later after I get these cliff pieces made for Cresty

I personally like the idea of expanding dwemer literature with particular bookshelves or books, but I fear a robotic arm is too steampunkish...
We could think of something special to add into Kagrenac's library in Tureynulal, to make it unique.

Actually, new books (if somebody will make them), can easy avoid lore.

1) They can be filled with art and intranslatable text, some like Codex_Seraphinianus
2) They can contain precise detailed drawings of dwemer's gas respirators.
3) There would be books that are containing useful information on maps or flora/fauna.

Most players saw ruins of Arkngthand:Heaven Gallery's Observatory.
If even vanilla MW contain such gyrate/perimeter lift - i presume it must to be in SW.
Same lift machine can be used in library - it just need to be cylindrical
(library can be much more deeper/higher than observatory room)
Also would be nice to have dwemer museum based on same concept.

Sure it need some concept-art.

Actually, new books (if somebody will make them), can easy avoid lore.

1) They can be filled with art and intranslatable text, some like Codex_Seraphinianus
2) They can contain precise detailed drawings of dwemer's gas respirators.
3) There would be books that are containing useful information on maps or flora/fauna.

While I'm not quite sure about the flora/fauna books, the first two points are actually good ideas.
I also liked a lot iceflame' suggestions.
I mean, we're talking about Kagrenac's library, you would expect to find a good amount of rare books or writings. Kagrenac was the biggest philosopher among the dwemer after all.

Rather than one defining canon that only Bethesda can release, TES loremasters encourage differing perspectives and theories on in-universe topics.

Indeed, this is one method writers use to invest people more heavily into lore. Vuagness was the reason communities were created for the sole intent of discussing the show "LOST."

I love that ruined gears photo.  Something like that would be cool.  3-5 different variations of rusty gears to make the ruins more ruined.  Theres a lot of details we can add that Bethesdays designers could not due to technology limitations (and designing for consoles in the case of Skyrim.)

Some other ideas for assets:

-Jars for hydraulic fluids and other mechanical lubricants

-dwemer clock?  Do dwemer keep time?  Do clocks even exist on Nirn?

Incidently does anyone have insight into the methods dwemer used in powering their constructs.  I know they have dynamos which presumably provide them with power, but how do these function?  Are they imbued with magical energy that drains from a soul stone (ie. a magic battery.)  This is how I've always figured they work but I don't remember reading anything specific.  Is the energy produced only used in their weapons and other magics used to keep the construct aware and moving, or are they more mechanical, using mechanics to move and be kept together.  Or a combination of both.  Perhaps using the dynamo as a amplifier of magical energy that is drained from the soul stone?  Or perhaps the dynamo actually powers the soul stone itself?

I've removed some posts to help get this thread on topic and tidy as this is where erik posts progress. No hard feelings about it guys. If you're interested in talking Lore feel free to start a new thread.

I think its sorta hinted in skyrim that dwemer centurions are powered by some sort of soul gem technology, since you can loot them from them, but that could just be part of it? Who knows! Anyway I think for morrowind, a lot of the power for machinery in terms of gameplay could maybe come from powered Dwemer coherers? I'd imagine powered ones would be rare though, as only one is encountered in game as part of Tribunal, and in that it is a quest item.

I really like your ideas for clutter! I will keep those in mind and draw some up as I work more on designing the dwemer architectural kits

Morrowind Dwemer tech was powered by proximity to the Heart. Hammerfell Dwemer stuff was implied to require soulgems. Skyrim Dwemer shouldn't have existed, but whatever. But yeah, heart.

I really like the idea of Dwemer clocks. A shame we can't have a super efficient Dwemer subway system to set the clocks to ;)

Ok, so considering that powering method, would it be a good idea to concept up some 'receivers' for the power.

Dwemer clocks... Heck. If any of the scripters want to get onboard then we could *Possibly* make a working clock that tells ingame time, along with moon phases and all that jazz. Would be quite the challenge though..

Now what happens after the heart is destroyed.. Is the entire island shut down? Do things slowly grind to a halt? Chaos? Relief?

I can add it to the list of things for us to look into, but it's going to be pretty low priority for now :)

Hmm. Not sure what should be done with the Dwemer machines. There was an in-game book that talked about how the machines stopped working if they took them off Vvardenfell, hinting that the heart was their power source. But nothing happened to them after the heart was destroyed in Morrowind. Might be that they slowly wind down, like Vivec, Sotha Sil, and Almalexia. Might be so so slow that we wouldn't notice? Also here is a Gif. Sadly the software I used sped it up so Its around 1.5 to 2x faster than it is in Maya.

Looks like rust but not dwemer metal. There could be more polies on the rolling elements. I can see every sharp edge when it rolls

Erik I've made one more door for you

Hm, i am confused. Does it opens like Vault 13 door?

Why dont just like safe door or door on submersible ship?
Or if that opens on side - why it need this kind of arm?

Yeah it looks kinda like fallout. I think roboarms should be limited to few examples in best option. Intead of that I think it is better to make opening mechanism a bit more low-tech, more heavy and crude based on gears, transmissions, pumps etc.

It looks cool, I know this is test, but the only thing which I can be picky are exhaust pipes. I'm not sure from where steam/heat is appearing.

Btw. can you do smaller examples (of moving things) which can be combined with each other? Just to give more freedom for level designers?

Some other ideas for assets:

-Jars for hydraulic fluids and other mechanical lubricants

-dwemer clock?  Do dwemer keep time?  Do clocks even exist on Nirn?

They are quite cool ideas.

About dwemer clock this example is most similar

It is hard to say anything from this perspective maybe you could give picture from different angle.

Save the vault door for the clockwork city, it could work with Sotha Sil's style.

Concerning Mo...'s Fallout looking door, it could be the type of thing that's used once in Dagoth Ur. Give the last dungeon some added ominous undertones with the right SFX going along with it.

Yeah uh sorry guys I'm not gonna give Vvardenfell dwemer fallout vault doors. Don't worry, there will be good variation in the look of the doors, maybe 2-3 distinct shapes with texture variants, but they will be staying true to look of what was presented in morrowind. Round doors will be the big ol stone slabs like they were in morrowind. Trust me, dwemer will not be boring! Just a far more detailed and expandable interpretation of what we saw in Morrowind, without the need for an enormous overhaul in the design of every little thing.

(also, side note, for the < > shaped  rooms and hallways, I am making the angle much less steep than it was in previous concepts. more like how it was in morrowind instead. I just feel like making that note here because a lot of the ideas I've seen presented are using that really steep angle based off of the ancient "suspended hallways" concept from last summer that I'm no longer super fond of)

But I do like the idea for more mechanized doors like that when it comes to the Clockwork City later on after phase 1, I'll keep that in mind :))) I definitely want to make it clear in its design that the clockwork city is not Dwemeri (assuming I can be granted concept privileges for Tribunal later on ;)

Some sort of unique door for Dagoth Ur citadel sounds like it could be fitting also, I'll look into that after designing the rest of the dwemer architectural assets

To be honest, I don't see what's wrong with the Morrowind or Skyrim style doors. I'm not sure doors need to be that complicated, especially when you have to wait for the arm to open the door for you every time. A sort of tonal lock, however, would potentially be a great way to add a puzzle element for some of the 'newer' and more important doors made as the Dwemer mastered their understanding of tonal architecture.

Then there were those doors with the mural on them: 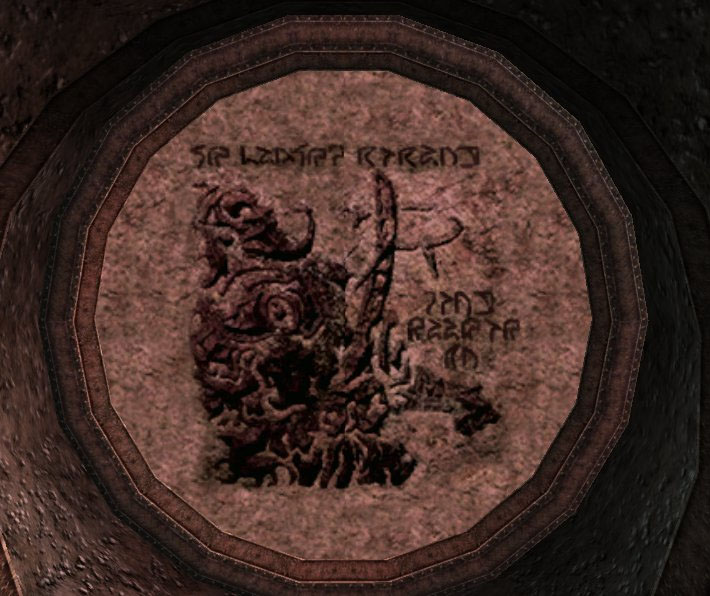 Perhaps one unique door could have some sort of tonal lock built into it that the player has to figure out to pass, for somewhere important to one of the quests (or with something rewarding behind it): 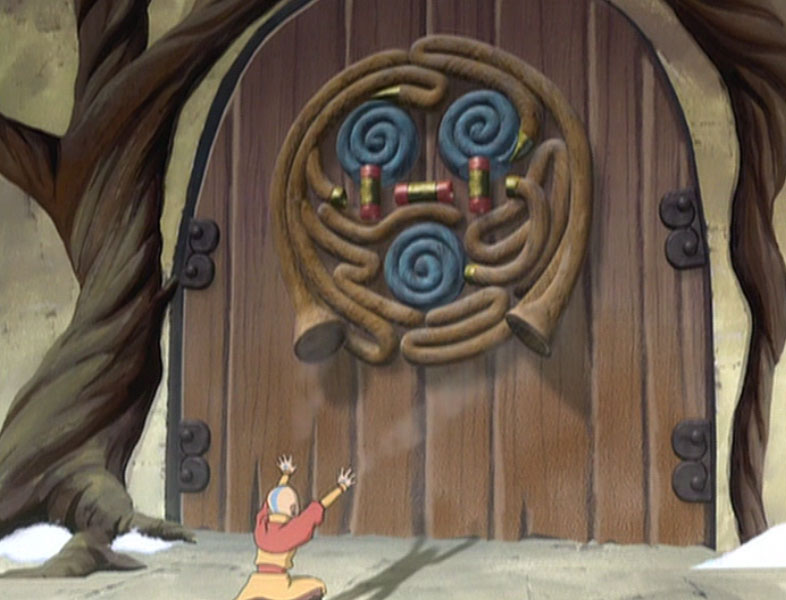 I think most doors should just be like Morrowind's, though.